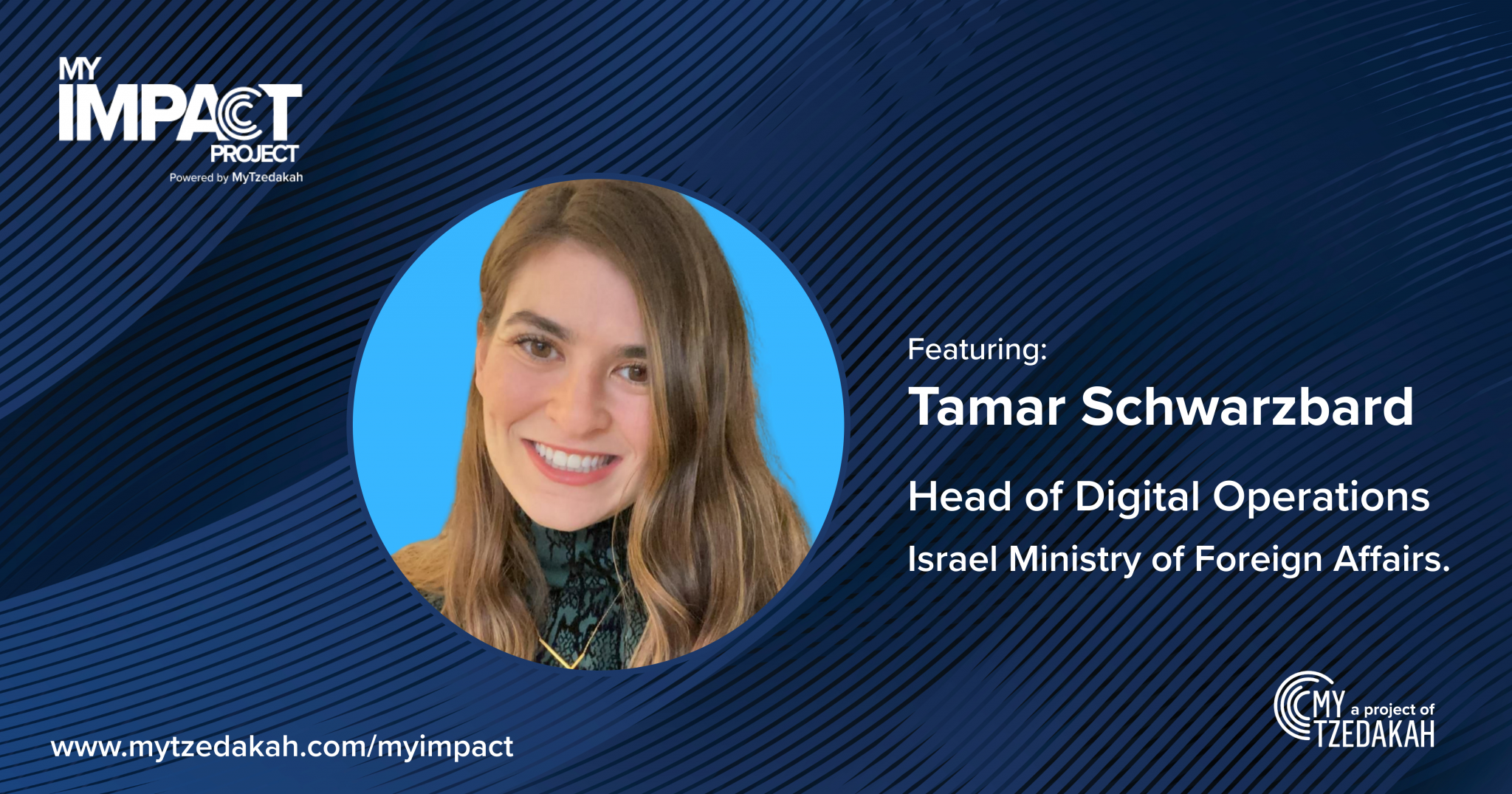 Tamar Schwarzbard is Head of Digital Operations at the Israel Ministry of Foreign Affairs.

In her role, Tamar manages the State of Israel’s digital channels, sharing Israel’s story with millions around the world.
Tamar has a B.A in history from Yeshiva University and a Masters in Communications and Journalism from the Hebrew University in Jerusalem.

She moved to Israel from New York City in 2013.

My parents and grandparents taught me the importance of compassion and helping those within the Jewish (and non Jewish community) in need. A lesson I learned from the grandmother who was a Holocaust survivor was that you don’t need to have a lot to give a lot and this has stayed with me throughout my personal and professional trajectory. As a young adult I volunteered in informal education programs, visiting Holocaust survivors and the elderly and eventually moved to Israel. After moving to Israel I joined the Israel Ministry of Foreign Affairs’ Digital Diplomacy Bureau, eventually becoming the Head of Digital Operations. In my role I am responsible for sharing Israel’s story and values with millions of people in the world and it is an honor to share the incredible miracle that is the Jewish State with the world.

Developing programming and tools for young Jewish people in the diaspora to feel protected and supported to share and express their Jewish identity. In recent years, covert antisemitism has risen dramatically across North America and Europe and young people are often the target of these heinous verbal (and sometimes even physical) attacks. I want young Jews to feel proud of their Jewish heritage, not afraid and programs which help create a sense of belonging to the greater Jewish community and to our shared history is one way to do this.

Where do I begin? Kidding. I have learned so much in my time here at the Israel MFA but the biggest lesson I’ve learned is that sometimes you take risks which can either backfire or can create an unimaginable positive change. During military operations, every tweet and post is analyzed both by Jews and Non-Jews, and sometimes the responses are very harsh and critical. The good news is, it gives you thick skin and you realize just how important your voice is as the digital “voice” of the Jewish State. I think it also reminds me of how much my grandparents suffered for being Jewish, and what a privilege it is for me to get to represent the only Jewish State in the world through my work.

Definitely my grandmother, a Holocaust survivor. She never had a lot but she always gave to those in need. The Jewish beggars in her neighborhood knew her by name and that is something that always stayed with me. I would also have to say the generosity of my parents to those in need. There were multiple times that my mother gave items of clothing (off her back) and food she just purchased to homeless people we came across.

Remember that we are the luckiest generation of Jews to have ever lived. The best way to live up to the legacy of our grandparents, great-grandparents and to those who lived before them is to help our Jewish brothers and sisters in need. We are so fortunate and the biggest form of gratitude is to give back to others. Use your talents and resources to make a difference (in all areas of your life). There are always opportunities to impact your community, you just need to find them.

The values that are important to me and the kind of organizations that would match those values. Charity helps others but it also allows us to help ourselves by feeling like we’ve done something positive to make someone’s life a little bit better. As an example, I’m someone who is passionate about Holocaust Remembrance and helping the elderly, so these are both values that I would include in my profile.